There are few better examples of sensor heavy AI systems than an autonomous vehicle. Each vehicle has overlapping core technologies and tools, all of which are required to make autonomous driving possible. Car manufacturers have been working on advances in automated driving technology in various forms since the 1990s. With modern advancements in technology size and artificial intelligence, the arrival of a commercially available autonomous car is imminent.

The philosophy for developing a fully autonomous vehicle is to make incremental steps in autonomy as the technology and machine learning capabilities expand. These autonomous AI programs are currently deployed in all vehicles available today, such as: pre-collision systems, lane departure alerts, automatic high beams, and more.

As we strive towards a fully autonomous vehicle, the major component to consider is vision technology; a bevy of sensors are required to gather the data from the car’s environment in real-time. A combination of video cameras, LiDAR, RADAR, and GPS aggregate data from the outside environment are merged with measurements reported by the vehicle itself. Each autonomous vehicle utilizes the latest in CPU/GPU technology on-board that inputs all sensor data, and makes decisions based upon the algorithms that control the car. With such a compute heavy task at hand, managing the data transference becomes absolutely critical when even a millisecond of network delay can have disastrous consequences.

General network Switches and NICs have been used in IT infrastructure since 1990, and are critical for systems running multiple devices within a network. As more ethernet based sensor technology becomes adopted, using a network switch to manage the traffic can significantly improve system throughput. But what can be done when space is constrained? Traditional switch technology is bulky and has prohibitive power and thermal requirements. When space is limited, integrating the switch into your edge device becomes the ideal solution.

Embedded Switches perform the same general function as a traditional switch, but come in an extremely compact form factor and are purposefully built to be designed into another device. Autonomous vehicles integrate numerous 1GbE and 10GbE sensors all throughout the vehicle. For the Artificial Intelligence algorithms to run efficiently, the data from each sensor is required to be processed instantaneously and not experience any network lag. The systems switch supports 1588 PTP (Precision Time Protocol), which is a standard used to synchronize clocks within a computing system – ideal for applications where timing is everything.

A layer 3 embedded switch routes individual video streams to specific ports, drastically cutting down overall network traffic within the vehicle. Each individual embedded switch can intake up to 4x 10GbE sensors, 8x 1GbE (SGMI) sensors, and 24x 1GbE sensors, for a total of 36 connected devices through a single switch.

As the race for a fully autonomous car continues, the major roadblock to mass adoption will be user confidence. The computer systems running the vehicles have zero margin for error – making building in redundancies and failsafes critical, which only adds to the overall data requirements throughout the vehicle. In addition to near perfect reliability of sensors and programs, the system also has to be invulnerable to malicious external attempts to remotely control the car or gleam confidential information. Having network and switch technology in place with trusted security helps aggregate the data flow while protecting vulnerable and mission critical information. 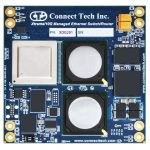 Tweets by ConnectTechInc
Go to Top